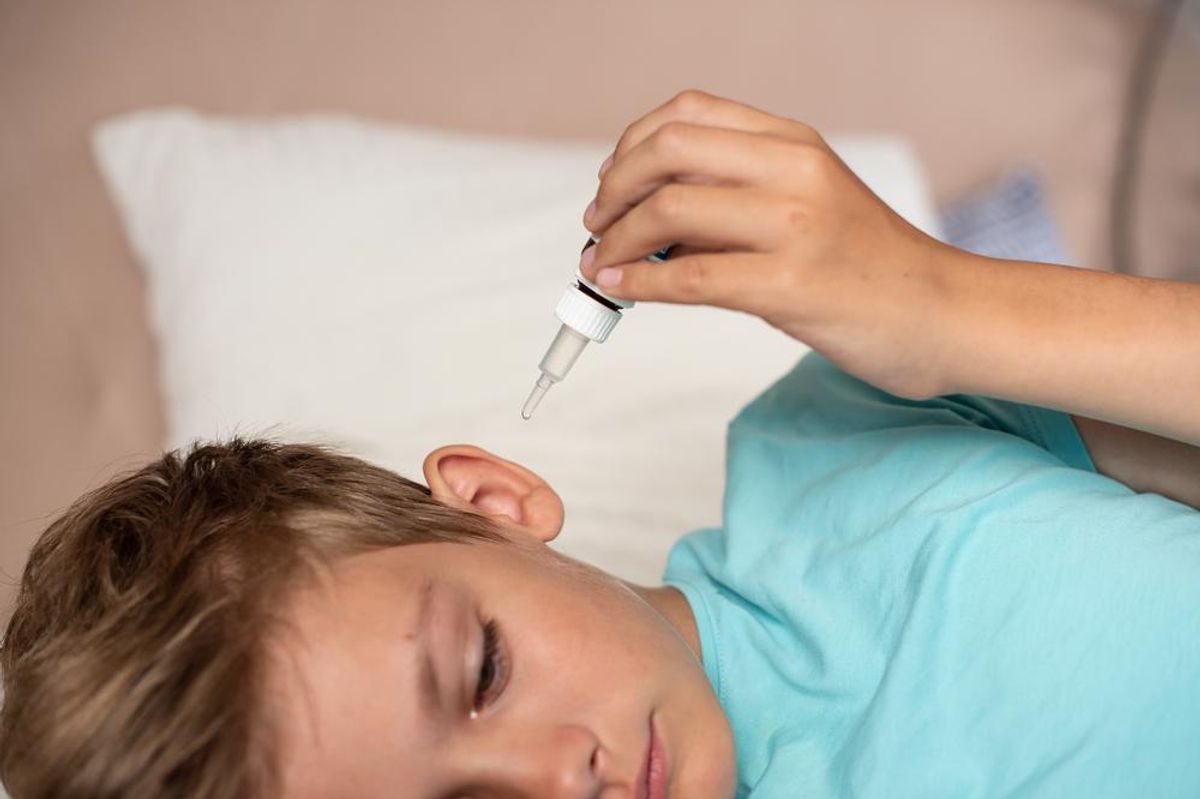 What is a middle ear infection?

A middle ear infection is simply an invasion of viruses or bacteria into the small space that lies just beyond the eardrum. The germs usually stage the assault while a child is recovering from a cold or flu, ailments that leave her ears partly clogged with fluids and create an ideal habitat for microbes. As the infection takes hold, the middle ear fills with pus, and the growing mass presses against the eardrum and causes considerable pain. Middle ear infections strike 80 percent of all children before their third birthday, and next to the common cold, they send more young kids to the doctor's office than any other illness.

What are the symptoms?

If your child is old enough to talk, she'll probably tell you her ear hurts or itches. She may also have trouble hearing. A younger child may simply tug at her ear and act irritable. Some children cry almost constantly, and most develop a fever. In severe cases, the fluid building up in your child's middle ear can break through her eardrum. Pus will start oozing from her ears, and her fever and pain will probably disappear. The eardrum usually heals on its own.

When should I call a doctor?

Call a doctor at the first sign of an ear infection. Most would quickly go away even without treatment, but prompt treatment can help prevent hearing loss and other rare complications. If the infection lasts more than two days, call the doctor again.

If your child develops a fever and a swollen face, or swelling behind the ear, call the doctor or go to an emergency room immediately: This could signal an extremely serious infection.

Why does my child get so many ear infections?

The eustachian tubes in infants and toddlers seem tailor-made to encourage ear infections. While the tubes in older children and adults slant downward, those in younger children are nearly horizontal. That means fluid drains slowly from young ears even at the best of times, and the flow is easily blocked. A young child's tubes are also about three times shorter than an adult's, thus giving germs an easy path from her throat to her middle ear. Children get more than their share of ear infections because they catch so many colds. The germs that invade the ear, though, aren't necessarily the same ones that caused the original illness. It takes a virus to trigger a cold or flu, but about 90 percent of ear infections are caused by bacteria.

What can my pediatrician do to treat them?

Doctors used to routinely prescribe antibiotics, but now often let ear infections resolve on their own. So don't be alarmed if your pediatrician wants to wait for a few days before giving your child antibiotics. Since antibiotics have long been over-prescribed, resulting in varying degrees of resistance to different germs, it's good medicine to limit the use of antibiotics for ear infections whenever possible -- especially for older kids with mild symptoms. In 2004, the American Academy of Pediatrics and the American Academy of Family Physicians released guidelines for the treatment of mild ear infections. They recommend treating any pain immediately, but suggest that practitioners may recommend observing the patient for 48 to 72 hours before prescribing antibiotics in children over six months of age whose illness is not severe. (All children under six months of age should receive antibiotics, according to the guidelines.)

A study in the British Medical Journal underscored the benefits of this practice: It found that the antibiotics offer only modest benefits for most kids with ear infections. They did reduce the chances that a child would feel pain more than two days after the infection began, but ear pain rarely lasts that long even if kids don't take medications. In all, researchers estimated that antibiotics eased the suffering in only one out of 17 children who took them. At the same time, the drugs frequently caused vomiting, diarrhea, and rashes. So if your child has mild symptoms of ear infections, there's an excellent chance the problem will disappear by itself.

What if the ear infections don't go away?

If an infection or fluid build-up lasts for three months, your child should have her hearing checked. If her hearing is impaired, doctors can usually restore it to normal by inserting small tubes through the eardrum that can drain fluid from the middle ear. The tubes will fall out on their own between six months to three years later. The surgery takes just a few minutes and causes little pain or discomfort. You will, however, have to keep water out of your child's ear while the tubes are in place, a bothersome chore if your kid likes swimming or splashing in the tub.

This operation, however, isn't necessary for most cases of persistent fluid buildup. The hearing loss has to be significant to warrant an operation; waiting a few more months often gives the fluid a chance to go away on its own.

What can I do to help my child feel better?

You can soothe your child's pain by giving her ibuprofen or acetaminophen or by holding a warm compress over her ear. (Never give aspirin to a child or teenager -- especially if he has a fever -- unless a doctor recommends it. Aspirin is associated with Reye's syndrome, a rare but potentially deadly disorder.) Use pillows to keep her head raised while she sleeps; this can help the fluid drain from her ears. If your child is crying at three in the morning with ear pain, your pediatrician can prescribe a bottle of novocaine-like medicine in an oily solution, which you then warm and place in the affected ear with a dropper; many parents have reported this method was successful in getting their wailing child to sleep. If your child has frequent ear infections, you may want to keep a bottle in your medicine chest.

Can ear infections be prevented?

You also might want to encourage your child to suck her thumb rather than a pacifier; research has shown that a baby picks up fewer germs if she sucks her thumb instead.

If your child has allergies, you can stave off ear infections by clearing your home of anything that causes a reaction. It's vitally important to keep the air around your child free from cigarette smoke: Kids who breathe second-hand smoke are especially vulnerable to ear infections.

If your child often develops ear infections after suffering from the flu, you might want to get her vaccinated before the flu season hits. And there is better protection: The Food and Drug Administration approved the conjugate pneumococcal vaccine which is designed to ward off the strains of bacteria that cause most ear infections. Researchers at the Kaiser Permanente Vaccine Study Center in Oakland, California, found that children who received the vaccine were about 20 percent less likely than other kids to have recurring ear infections or to need ear tubes.

It's good to remember, though, that hearing loss or other serious problems from a childhood ear infection are extremely rare. The vast majority of kids with ear infections never experience any complications.

Centers for Disease Control. Pneumococcal Conjugate Vaccine: What You Need to Know. http://www.cdc.gov/vaccines/pubs/vis/downloads/vis...

COVID-19 Treatments: What You Need to Know

Want to Avoid Glaucoma? Look at What You Eat

Weather and Arthritis: Is There Really a Connection?