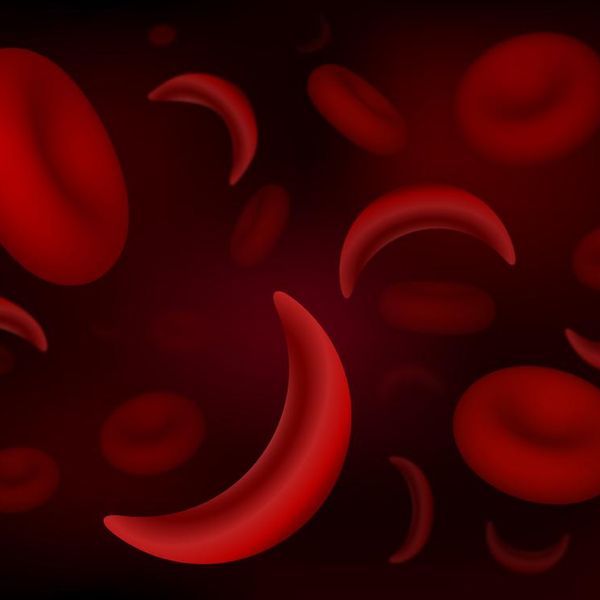 What is sickle cell anemia?

The problem is that when a red blood cell with hemoglobin S releases oxygen, the cell changes from the usual doughnut shape to a sickle or S shape, and becomes stiff rather than soft and flexible like normal red blood cells. This "sickled cell," which resembles a crescent moon, can't continue to glide through the small blood vessels as usual. Instead, it gets stuck in the tiny blood vessels, blocking the flow of blood and causing pain.

The spleen, an organ on the left side of the abdomen across from the liver, is responsible for filtering the blood for infections and other abnormalities. Normal red blood cells can change shape and squeeze through this filter, but sickled cells get stuck and cannot recirculate through the body, so that the number of circulating blood cells goes down. Meanwhile, the bone marrow, where red blood cells are made, pitches in by making more cells. It can't keep up with the destruction, though, so the total number of red blood cells drops to a low level and the body becomes anemic. ("Anemic" is the medical word for having a low number of red blood cells.)

How does a child get sickle cell anemia?

You may not even realize that you're a carrier of sickle cell anemia until you have a child born with the disease. A genetic counselor or your pediatrician can explain the patterns of heredity to you and estimate the chances that your future children will have the disease.

Can carriers get the disease?

Most experts would say no. If your child inherits one hemoglobin S gene and one hemoglobin A gene (the normal one), he'll make both kinds of hemoglobin and thus be a carrier of the sickle cell trait. He's healthy, because the hemoglobin A keeps his blood flowing smoothly. When he grows up, though, he can "carry" the gene to his children.

Under normal conditions a carrier will never develop sickle cell anemia. In the past, some researchers have been concerned that under extreme conditions -- low oxygen, mountain climbing, vigorous exercise -- carriers might develop symptoms of the disease. Many professional athletes, in fact, have sickle cell anemia. The issue is still controversial and the theory unproven; still, if your child's a carrier, you may want to discuss the issue with your pediatrician.

There are blood tests that screen for the presence of sickle cells, and a blood test that gives your entire hemoglobin profile. All states screen newborns at birth, and some health providers screen all pregnant women. Doctors also sometimes diagnose children before birth.

What are the symptoms?

If your child has sickle cell anemia, your support and understanding of the disease are invaluable to him. If he complains of a sudden, severe pain in one part of his body, for example, you'll know that's probably where the sickle cells are stuck. This "pain crisis" or "sickle crisis," as it's called, may require a trip to the hospital, where doctors can make your youngster more comfortable. The pain can occur anywhere, but most often arises in the chest and long bones of the body. Painful swelling of the fingers and toes also occurs in 50 percent of children with sickle cell disease before age 3. The low number of red blood cells can make children pale and tired. Sometimes, if many sickle cells are breaking at once, the child may develop a yellowish color, or jaundice. Some other symptoms of the disease include:

When should I call a doctor?

At the first sign of illness. When healthy children feel bad, professionals often advise trying home treatments -- like giving extra fluids or using pain medication -- before calling a doctor. In a child with sickle cell anemia, however, the risk of a life-threatening infection is so high that you should call a doctor as soon as your child shows any symptoms of illness.

What does the future hold?

Over the years, children with sickle cell anemia grow and develop more slowly than other children. As adolescents and adults, they tend to have a slight build and develop gallstones, kidney problems, and a condition that weakens the hip, often requiring hip replacement; more than half live to age 50. With proper treatment they can live full, productive lives.

What are my child's treatment options?

To prevent infection, your child will take penicillin daily from the time of diagnosis until at least age 5. He'll receive the same routine vaccinations as other children, plus a regular pneumococcal vaccine (with additional stronger vaccination doses several years apart), the flu vaccine each year, and vaccination against meningitis.

Severe pain crises may require a stay in the hospital, especially if your child can't drink fluids because of vomiting or pain. As part of his standard care, doctors will give him intravenous fluids ("IVs"), oxygen when necessary, pain medication, and, if infection is suspected, antibiotics. Red blood cell transfusions are often given for stroke, for anemia, or before major operations.

More recently, doctors have begun using a special transcranial ultrasound machine to identify those at high risk of a stroke, so that they can receive transfusions that will prevent it.

What can I do to keep my child from falling ill?

Try to keep your child from getting over-stressed or dehydrated, and avoid exposing him to extremely cold temperatures or high altitude. It's also a good idea to keep him away from people who are sick.

Can sickle cell anemia be cured?

Scientists are encouraged by experiments in which researchers transplant bone marrow or "stem cells" from umbilical cord blood into children with sickle cell disease. Preliminary results from a national study are promising: 91 percent of the patients were alive two years after the transplant, and 73 percent of them were cured of the disease. As with all transplants, there are persistent problems finding matching donors and keeping the patients' bodies from rejecting the foreign tissue.

Since scientists know exactly which gene is different in hemoglobin S, many hope that in the future gene therapy will make it possible to ward off the disease before a baby is born.

How can we cope with this disease?

Living with sickle cell anemia can put a lot of stress and pressure on families, both emotionally and financially. But there are many resources that can offer support to you and your child. Sickle cell centers offer counseling, social services, education, testing, and support: Ask your doctor about resources for sickle cell patients in your area. A pediatric hematologist (children's blood specialist) can keep you up-to-date on current research. And the Internet offers a variety of support groups, "sickle cell diaries" written by people with the disease, and other resources.

Fat Around the Liver Raises Risk for Heart Failure

How can I get my child to stop whining?A school-age child who whines can be a...