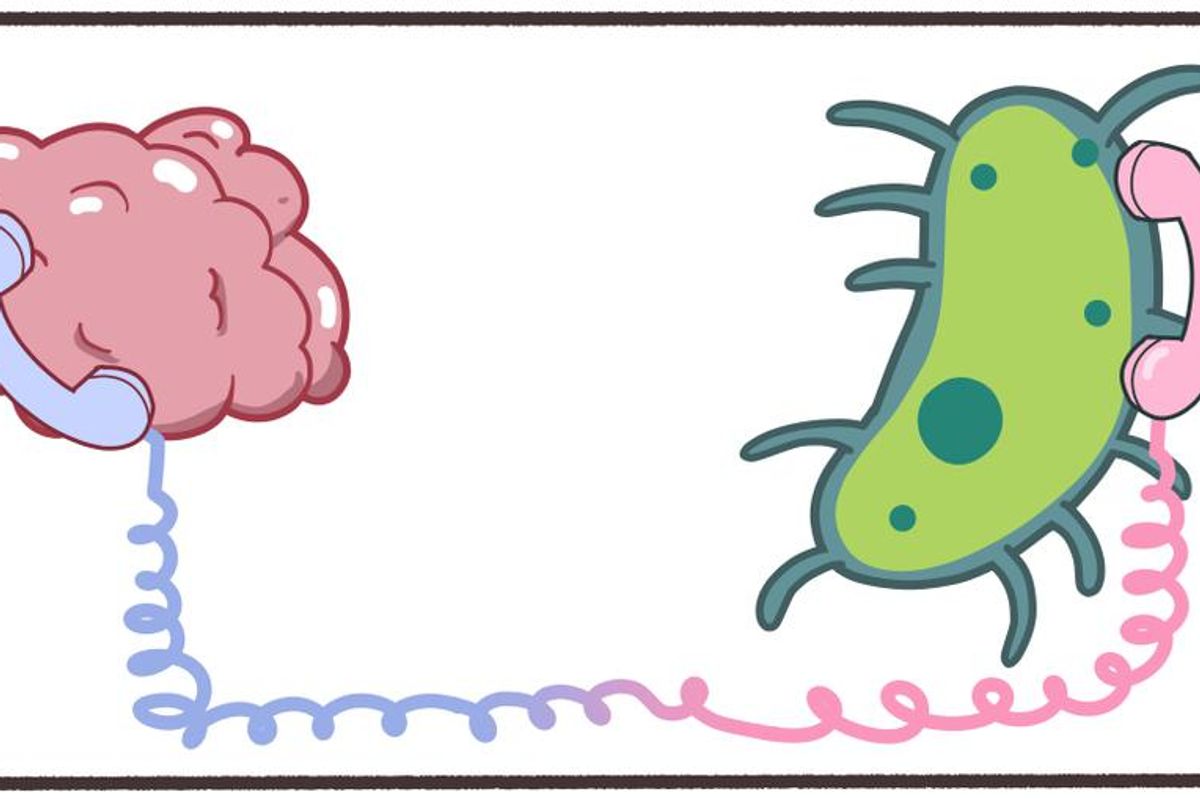 If you've ever felt your insides twist in knots before a big speech, you know the stomach listens carefully to the brain. In fact, the entire digestive system is closely tuned to a person's emotions and state of mind, says William E. Whitehead, PhD, a professor of medicine and director of the Center for Functional GI and Motility Disorders at the University of North Carolina.

People with irritable bowel syndrome often suffer flare-ups during times of stress and anxiety, and even perfectly healthy people can worry their way to stomach pain, nausea, diarrhea, constipation, or other problems. Even if a doctor can't find anything physically wrong, the misery is real.

In the past -- back when scientists believed the mind and the body operated as separate entities -- some physicians wrote off digestive distress with no sign of organic disease as being "all in the head." But in recent years, that wall has crumbled. Doctors now see intricate links between the nervous system and the digestive system. The two realms constantly exchange streams of chemical and electrical messages, and anything that affects one is likely to affect the other. The connections between the two systems are so tight that scientists often refer to them as one entity: the brain-gut axis, an increasingly hot topic in medicine. For people suffering from persistent digestive troubles unconnected to disease, such research suggests that reducing stress, depression, and anxiety may go a long way toward calming the gut.

Listening to your gut

It may surprise many people to learn that the gut actually contains as many neurons (nerve cells) as the spinal cord. In an article in the medical journal Gut, author J. D. Woods and colleagues compare this network -- known as the enteric nervous system, or ENS -- to a "local mini-brain" storing a library of programs for different patterns of gut behavior." Woods and colleagues compare the ENS to a microcomputer with its own independent software, "whereas the brain is like a larger mainframe with extended memory and processing circuits that receive information from and issue commands to the enteric computer."

With all these messages, the connection between the brain and the digestive system is a busy two-way street. The central nervous system releases chemicals (acetylcholine and adrenaline) that tell the stomach when to produce acid, when to churn, and when to rest. Similar signals help guide the movements of the intestines. The digestive system responds by sending electrical messages to the brain, creating such sensations as hunger, fullness, pain, nausea, discomfort, and possibly sadness and joy.

As strange as it sounds, our guts just might help shape our moods, says Emeran Mayer, MD, a gastroenterologist and director of the Oppenheimer Center for Neurobiology at the University of California at Los Angeles. Mayer points to the vagus nerve, essentially a large electrical cable that runs between the brain and the digestive system. "Doctors once believed the nerve's main job was controlling acid production in the stomach," Mayer says. "But 95 percent of the fibers go the other direction -- from the gut to the brain."

Nobody knows exactly what messages travel along this cable, but scientists have found that stimulating the nerve at different frequencies can cause either anxiety or a strong sense of well being. Perhaps the term "gut feeling" isn't just a figure of speech after all.

Mayer suggests another intriguing possibility: Prozac and similar antidepressants may actually work on the gut, not the brain. Drugs known as SSRIs (short for selective serotonin reuptake inhibitors) ease depression by enhancing levels of serotonin. Most experts assume it's the extra serotonin in the brain that helps improve mood. But 95 percent of the serotonin in the body actually lies within the digestive system. Perhaps, Mayer says, SSRIs do their job by boosting serotonin in the gut and changing the signals along the vagus nerve.

Whatever messages may be passing back and forth, they can easily become garbled in times of stress. When the brain senses a threat, real or imagined, it sounds the alarm by flooding the body with adrenaline and another hormone called CRF (short for corticotropin-releasing factor). These hormones trigger the "fight or flight" response -- helpful back in the days when humans had to run from lions, but a potential liability when we lose a job or go through a divorce.

If you suffer from frequent emotional distress -- perhaps because of extreme stress, depression, or anxiety -- the unrelenting flood of adrenaline and CRF will take a toll on your digestive system. For one thing, the hormones can make the cells in the stomach and intestines extra-sensitive to pain. As a result, normal contractions and movements can become excruciating. The new signals can also disrupt the motion of the intestines, causing bouts of constipation or diarrhea.

Functional disease in a dysfunctional world

Because of the close connection between the brain and many abdominal disorders, some digestive disorders are known as "Functional Gastrointestinal Disorders," or FGIDs. A "functional" disease, in this case, means a disturbance in GI function that it isn't related to any injury, infection, or other obvious physical problem. These criteria, which include persistent constipation, diarrhea, bloating, abdominal pain, or irritable bowel syndrome unrelated to a diagnosable physical disorder.

Among these disorders is irritable bowel syndrome (IBS), a very common and perplexing malady often characterized by painful cramps, bloating, and constipation alternating with diarrhea. If you have "functional" IBS, you may feel that "dysfunctional" is a much more apt term.

Emotional distress alone can't cause IBS -- the source of the disorder is still unknown -- but stress or a mood disorder may worsen the symptoms. In fact, few other conditions provide such a clear illustration of the link between the mind and the body. One Australian study found that chronic distress -- arising from such traumas as divorce, lawsuits, serious illnesses, or job troubles -- accounted for 97 percent of all changes in IBS symptoms. Interestingly, short-term swings in mood don't seem to have much effect on IBS, which explains why many people still suffer symptoms on relatively calm, relaxing days.

In a similar manner, strange messages along the gut-brain axis also seem to be a major cause of "functional" dyspepsia, or indigestion. People with dyspepsia often experience the discomfort of constant ulcer pain without actually having ulcers. Stress definitely makes the symptoms worse, but the effect isn't nearly as dramatic as with irritable bowel syndrome. If adding stress to functional dyspepsia is like throwing woodchips on a fire, combining stress with IBS is like dousing a blaze with gasoline.

The influence of the mind on the gut goes beyond functional diseases. For instance, people with Crohn's disease or ulcerative colitis -- two conditions with clearly physical origins -- often suffer flareups during times of emotional stress. In one survey, 68 percent of people with basically healthy digestive systems said stress gives them stomachaches.

Scientists are also studying the possible connection to the gut-brain connection and mental disorders. Gut microbes affect the "brain fertilizer" your body needs to maintain its equilibrium, according to Psychology Today, and animal studies suggest that probiotics and other beneficial germs that alter the gut microbiome may eventually be used to influence mental as well as physical disorders in the future.

Setting your mind on relief

So what can you do if your mind and your digestive system aren't getting along? One thing you shouldn't do is suffer silently. Ask your doctor if you would be a good candidate for cognitive behavioral therapy, interpersonal therapy, relaxation therapy, or another form of counseling. In several studies, these treatments have been shown to give IBS patients more relief than standard medical therapies. You might even consider hypnosis or self-hypnosis.

There's another reason to go to the doctor: Simply hearing you're not crazy or gravely ill may be a great source of comfort. "Reassurance from a physician is probably the most effective treatment [for IBS]," Mayer says.

Meanwhile, do what you can to avoid stress and work closely with your doctor. With a little luck, your gut feelings will be much more pleasant.

UCLA-The Inside TRAK. Does stress cause IBS or similar disorders in other parts of the GI tract?

Wilhelmsen I. The role of psychosocial factors in gastrointestinal disorders. Gut.

Wilhelmsen I. Brain-gut axis as an example of the bio-psycho-social model. Gut.

Cumulative Exposure to Estrogen Linked to Lower Risk for Stroke

Even When Stroke Centers Are Near, Black Americans Often Lack Access