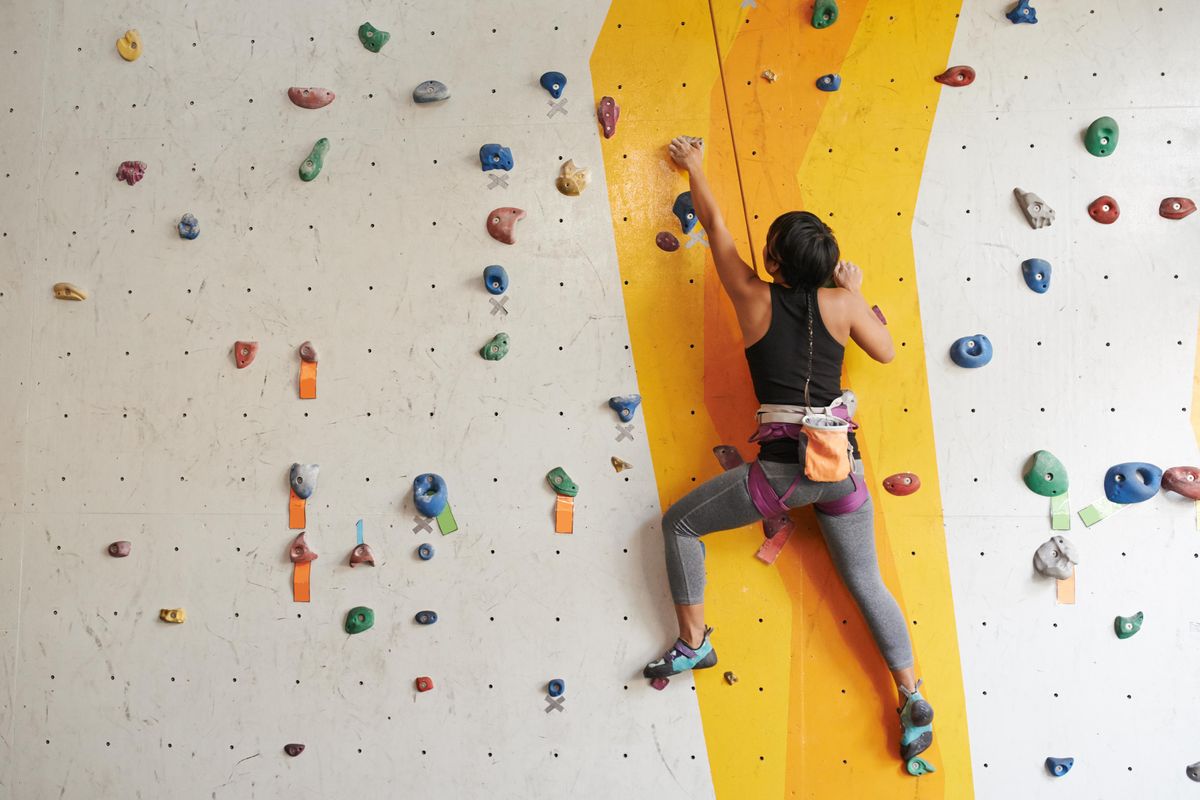 Not surprisingly, people living in Boulder, Colorado, have access to some pretty decent rocks. Climbers come from all around to scale the famous Flatirons and other stretches of sandstone or granite in this part of the Rockies. But the mountains aren't the only game in town. In recent years, many serious -- and not so serious -- rock climbers have taken their sport to the great indoors.

Climbing walls are springing up in gyms across the country, from Boulder to Manhattan. About five million Americans participate in indoor climbing, according to a rock climbing industry analysis.

Stuck to the wall

It's not hard to see why so many people are scaling artificial heights, says Matt O'Connor, owner and manager of the Boulder Rock Club in Boulder. "A lot of people don't have time to go climbing outdoors," he says. Instead of hauling all of their gear up to the mountains, they can just drop by the gym. Depending on which routes a climber chooses, artificial walls can be as challenging as a sheer cliff or as easy as a step ladder. And thanks to ropes and harnesses, there's practically no chance for a nasty fall.

Most of all, indoor climbing is a great, fun workout. "It's total-body exercise," O'Connor says. Climbing improves strength and flexibility from fingertips to toes, he says, and the faster climbers get an aerobic workout as an added bonus.

All ages, all abilities

The typical indoor climber is fit, adventurous, and young. In fact, the median age of indoor climbers -- 26 -- is the lowest of any activity tracked by the OIA.

O'Connor sees plenty of twenty-somethings in his gym, but there's no age limit. "We've had climbers from age 2 to 75," he says. Climbers come in every shape, size, and ability level. Still, the stereotype of the young, buff climber has kept many people away from the sport. "People think that they have to weigh 115 pounds and be able to do 200 pushups to be good at it, but it's just not the case," he says.

Of course, people who hang by fingertips for a hobby run a risk of injury. And unlike most other sports, it's usually not the novices who end up getting hurt. A survey in England found that 44 percent of indoor climbers had suffered some sort of overuse injury. The climbers who spent the most time on the wall -- or, as researchers put it, "those with the most ability and dedication" -- were the most likely to suffer for their sport.

The list of injuries that often strike long-time climbers includes carpal tunnel syndrome, strained ligaments in the fingers, and tendinitis of the fingers, forearms, and shoulders.

When people develop a life-long love for a sport like indoor climbing, a few overuse injuries are probably inevitable, O'Connor says. "You'd see the same sorts of things if people did gymnastics into their thirties or forties," he says.

Still, climbers can take steps to protect themselves. Strategically placed strapping tape can help prevent finger injuries. And as with any exercise, climbers should understand the difference between getting a good workout and pushing their bodies too far.

As indoor climbing becomes more and more popular, safety is taking center stage, O'Connor says. The equipment is improving, more and more doctors are becoming familiar with climbing injuries, and personal trainers are developing workouts specifically designed to prevent overuse injuries in climbing. "The sport has become so popular it warrants that kind of attention," he says.

Indoor climbing has its drawbacks. There are no spectacular views, no bird songs, and no fresh breezes that don't come from an air conditioner. But for a quick, fun, and relatively pain-free workout, you could do much worse than hitting the wall.

Interview with Matt O'Connor, owner and manager of the Boulder Rock Club in Boulder, CO.

Study Points to Jobs With Highest Risk for ALS

Cumulative Exposure to Pesticides Linked to Risk for COPD