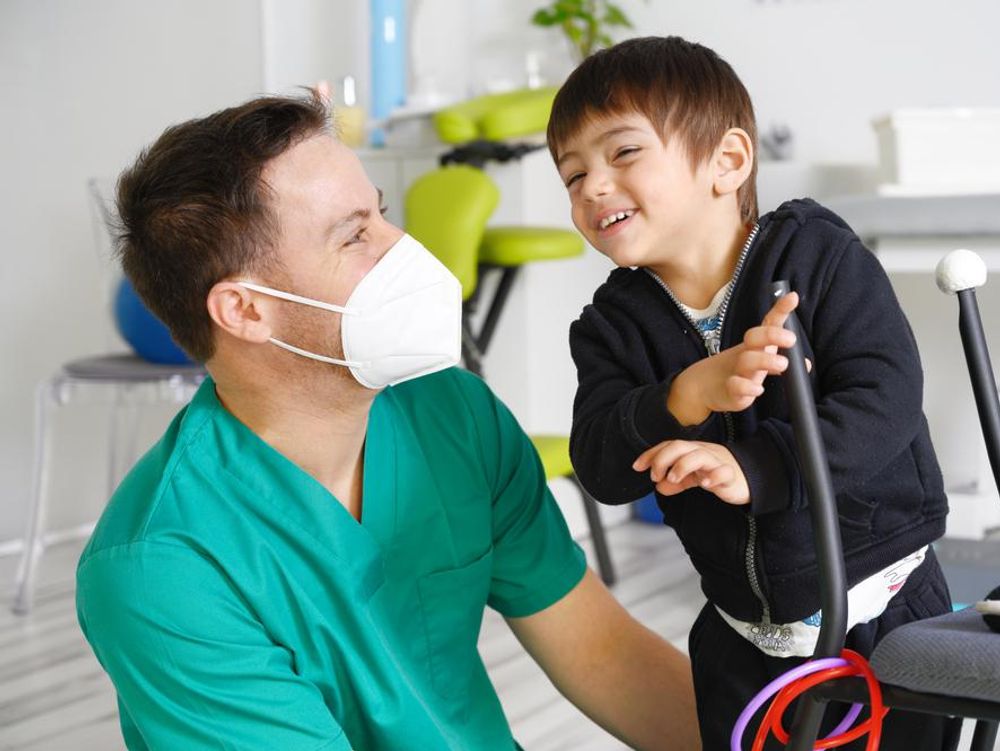 What is cerebral palsy?

The growth of a human brain is an incredible feat of nature. Even before a baby is born, many billions of neurons have to fit together as precisely as the pieces of a puzzle. With that kind of complexity, it's no wonder that there's sometimes a glitch in the assembly. If the part of the brain that controls muscles is damaged or undergoes deviations while the brain is growing, it can lead to a condition called cerebral palsy ("cerebral" refers to the brain and "palsy" to the state of the muscles).

Roughly three-quarters of a million people in the United States have the condition, according to United Cerebral Palsy. It can take many different forms: Some children with the condition simply appear clumsy, while others are unable to walk. Many have trouble lifting their hands or holding a crayon, and some must struggle to talk or even breathe. Children with cerebral palsy are also at greater risk for seizures, mental retardation, and problems with hearing and vision. All can be helped through therapy and a warm, supportive environment.

How will I know if my child has cerebral palsy?

The wide range of symptoms can seem confusing, but there are a few reliable hallmarks to watch for. A baby over two-months-old may feel stiff or floppy, and may arch his back and stretch out his neck when you hold him in your arms. An older baby might use only one hand to reach for a toy, or use only one side of his body when crawling. Many babies with cerebral palsy are slow to reach milestones such as rolling over, sitting up, smiling, or jabbering. They may also have trouble swallowing and sucking.

Parents are often the first ones to notice an unusual behavior in their child. This can be troubling, so it's important to share concerns with your pediatrician right away to get a clearer sense of what might be going on. It's normal for infants to develop at different rates, of course. But if you sense that your child is noticeably behind the curve, or if there are other behaviors that worry you, seek advice. Regular check-ups also help screen for cerebral palsy and other problems.

Since there's no single test for cerebral palsy, your pediatrician will usually make the diagnosis through careful observation. She may have reassuring news, but if it's confirmed that there is a problem, she can connect you to helpful information and support services.

For any particular child, it's often impossible to pinpoint the cause of the problem. Doctors do know, however, that anything that interferes with a growing brain can trigger the condition. The risk of cerebral palsy increases dramatically if a pregnant woman smokes, drinks heavily, has diabetes, or catches German measles (also known as rubella). Some children with cerebral palsy didn't get enough oxygen in the womb, perhaps because of a small kink in the umbilical cord. Premature babies, who tend to suffer complications before and after birth, are much more likely than full-term babies to develop cerebral palsy; twins or triplets are also at greater risk for the condition. In some cases, cerebral palsy is caused by a head injury or a brain infection such as meningitis during the child's first two years of life.

As in the case of any serious disorder, parents often feel guilty about the diagnosis. A mother, in particular, may wonder if she should have done something different during her pregnancy. It's important that parents not blame themselves: Most cases of cerebral palsy have no identifiable cause. The best thing for families to do is to concentrate on developing their child's potential to the fullest extent.

Can cerebral palsy be prevented?

The best way to prevent cerebral palsy is to protect your child's growing brain. If you are planning to get pregnant and have never had German measles, talk to your doctor about getting vaccinated against the disease. If you are already pregnant, try to stay as healthy as possible. Get regular prenatal medical care, eat a nutritious diet, avoid smoking and alcohol, and always talk to your doctor before taking over-the-counter or prescription medicines or herbal supplements. If you learn that you have maternal diabetes, which occurs during some pregnancies, get treated for it right away and be vigilant in caring for yourself.

Since serious head injuries in the first two years of life can result in cerebral palsy, supervise your child carefully, childproof your home to reduce the chance of a fall, and always use car safety seats and bicycle helmets. The American Academy of Pediatrics also advises parents never to carry an infant under 1-year-old on a bicycle.

If my child has cerebral palsy, what can be done to help?

While cerebral palsy lasts a lifetime, much can be done to help children manage their disabilities, and the results are often excellent. In some cases, doctors use medicines and surgery to improve muscle coordination or use medication to control seizures. Although some people equate cerebral palsy with mental retardation, many children with the condition are highly intelligent -- and all can benefit from the therapies and services available to them.

Children with mild cerebral palsy may not need any extra help, but children more severely affected by the condition often benefit tremendously from a variety of therapies and services. These include physical therapy, which improves muscle movement and coordination through exercises and routines; occupational therapy, which concentrates on daily tasks such as brushing teeth and dressing; and speech or language therapy.

These therapies may work wonders for your child. They generally focus on teaching independence, or helping your child learn to do as much as possible on his own without assistance. If he has mild cerebral palsy, physical therapy may help him to build arm strength by repeatedly lifting toys or blocks. If the case is more severe, the therapy may teach him to use a wheelchair or to sit upright. Speech therapy can help with enunciation or teach your child how to use a computer for communication. Many children with cerebral palsy go on to live full, productive lives.

A range of services and counselors is also available to help you deal with the emotional and psychological difficulties that commonly arise when your child has cerebral palsy. Certain therapists and social workers specialize in treating children with disabilities and their families. Later, when a child reaches school age, special education teachers or school counselors are important resources.

You can also redesign your home environment to give your child extra support. Specially designed equipment, toys, and household items including spoons, cups and chairs are available for children with muscle control problems; many of these items can be tailor-made for your child. Children who have trouble grasping a pen or holding a book can learn to read and write with the help of computers.

Are there any new treatments in the works?

Yes. Researchers are working on several experimental procedures that show some promise. In one, electrodes are used to stimulate certain nerves in the cerebellum, the part of the brain that controls movement coordination. Research thus far shows mixed results. In the other technique, parts of the thalamus, which relays messages to and from muscles, are surgically cut. This procedure appears to help control tremors. Researchers are also looking into a type of physical therapy called constraint-induced therapy, which involves restraining a healthy arm or leg so that the other, weaker limb is forced to perform various activities designed to improve muscle strength and control. Another area of interest is functional electrical stimulation, in which tiny, microscopic devices are injected into specific muscles or nerves. These devices, which are controlled wirelessly by remote control, are used to strengthen and activate the muscles.

Researchers in the fields of medicine and health are using their expertise to improve the treatment of cerebral palsy, and are working towards preventing it.

Scientists are looking for the genes responsible for brain abnormalities by collecting DNA from people with cerebral palsy and their families. Using special screening techniques, researchers are using DNA to look for links between individual genes and specific abnormalities, such as brain cells that form bad connections.

Scientists are also examining what happens when the brain of a baby suffers from a traumatic event like bleeding, a seizure, and breathing or circulation problems. These physical problems can cause the release of chemicals in the brain that can kill nerve cells. Scientists hope to develop drugs to block the harmful effects of these chemicals.

In addition, there is much current research on ways to prevent or reduce the incidence of low birth weight and prematurity.

If my child has cerebral palsy, where can I turn for support?

Steven P. Shelov, MD. The American Academy of Pediatrics. The Complete and Authoritative Guide: Caring for Your Baby and Young Child. pp. 536-538.

American Academy of Pediatrics. The Injury Prevention Program: The child as passenger on an adult's bicycle http://www.healthychildren.org/English/safety-prevention/at-play/Pages/Baby-On-Board-Keeping-Safe-On-A-Bike.aspx

Adults With ADHD Face 4 Times the Odds for Anxiety Disorder

AHA News: Here’s to a Fresh Start With Whatever You Do in ’22